It has taken me three years to finish writing in my current journal. I’m a little mortified that it has taken me this long to do so because it’s obviously just a testament to how poorly I keep to my yearly resolutions of writing more.

I haven’t taken the time to reread my past three years of silly woes, but just a quick glance at the first entry from December 26, 2013 has made one thing clear to me: My family has changed very little about how we celebrate Christmas over the years. Some new traditions and practices have been introduced, but at the core, we still have the same sentiments as we had some ten, 20 years ago.

My brother and I start fussing about putting the Christmas tree up (we have a fake tree) on New Year’s Day; and then again in May or June around the time I used to get out of school and he still does; and through all of November until Black Friday — which is when we finally haul our many boxes of Christmas decorations out of the garage and put everything together. 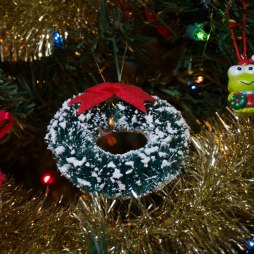 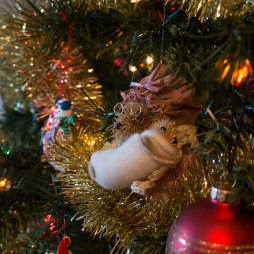 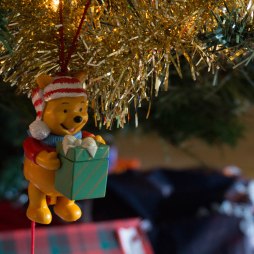 He and I “fight over” some of the ornaments because the finder then immediately gets the rights to hang it up on the tree. The physical anomaly of the snow dusted wreath (left) is always one of the first to go. (I got it this year.) I think my brother was appeased after I let him hang the gold orbs we bought a few years back to replace very similar, but much older gold ornaments that had started to lose their shine after seeing so many Christmases.

Mother Mouse (center) was a gift my mom had received I think back when she was still at her very first job. For years, she wouldn’t let my brother nor I handle the ornament because she was afraid we’d break it. It was only after I started elementary school for a few years that I was finally allowed to hang her up for the first time.

Pooh Bear, my best friend since 1994, has always been “my” ornament, and even though I’m now tall enough to reach other parts of the tree, I always hang him on the bottom branches because his little pull string — to reveal Piglet hiding in the gift box — makes him get tangled on the other branches.

Around four years ago, my mom began to develop a penchant for collecting new ornaments, even as we all mockingly wailed every year that we’re running out of branches on the tree. This particular camera (who also comes with a partner, hung elsewhere on the tree) was one that my brother and I bought for her last Christmas.

Both of the cameras can easily sit on my hand, but Amazon shipped them to me in a box that was at least 12″ x 8″. It seemed silly to wrap such a small gift in a massive box so I ripped off a corner of the original packaging and fashioned a new one. My mom still uses my very crudely constructed box to house these ornaments for the other 11 months of the year. (Not including pictorial evidence because I was an English major, not an architecture or a design major.)

Our newest friend on the tree this year is this little guy, whom I bought for my mom on her birthday. I bought him while on lunch break at work one day, and I consider myself very fortunate to have gone when I had. It was early December, but many of Hallmark’s ornaments were already selling out.

I saw this little one hanging on the display, but couldn’t find any of his friends on the shelf, so I asked an employee if he was the last one. He was, but she offered to sell him to me off the wall. I said yes, and now he’s found a happy little home with us.

On Christmas Day proper, it’s rather quiet in our house. We wake up in the morning and open presents, work on a jigsaw puzzle together, but there’s never anything super fancy — and I kind of like it. Simply being home and spending time together — whether it’s with our necks strained over a puzzle or sitting in separate rooms “playing” with our “new toys” — is a comfort to me, and one that brings particular warmth during the holiday season.

I go back to work on Wednesday, so this year more so than the years prior, I’m just very glad to be home with family for the holidays.

Hope you all had wonderful holiday seasons and continue to do so. Happy Holidays from my home to yours!