I do not speak Russian so I apologize for not being able to help you figure out how to pronounce “medovik.” I can, however, tell you how much I enjoy eating it.

In English, Medovik is called “Russian honey cake.” The first time I had it was on my second full day in Europe. I’d been wandering through the cobblestoned streets of Prague, searching for a more innocuous cafe to eat at for lunch. I’d decided the day prior, on my first day in Europe, a number of things:

And yes, for almost two full weeks, I had just a slice of cake for lunch. I don’t regret any bite of it (nor the salad I ordered about a week later because my body was 100% done with meat and fried cheese). As you can see from the photo, I was clearly very excited about my cake.

Of all the cakes I ate in Europe during that trip though, the Medovik was the one that stuck with me even after I returned home and years passed. Though its taste slowly faded from my tongue’s memory, I continued to tell people that it was my favorite dessert.

You can only imagine my immense delight when I spotted a slice of Medovik in the Instagram photo of a San Francisco-based fashion blogger, Tiffany Wang. I had to go. I didn’t care if the cafe was almost inaccessible — I was going to go.

Spoiler: I had my cake and ate it too, at 20th Century Cafe. 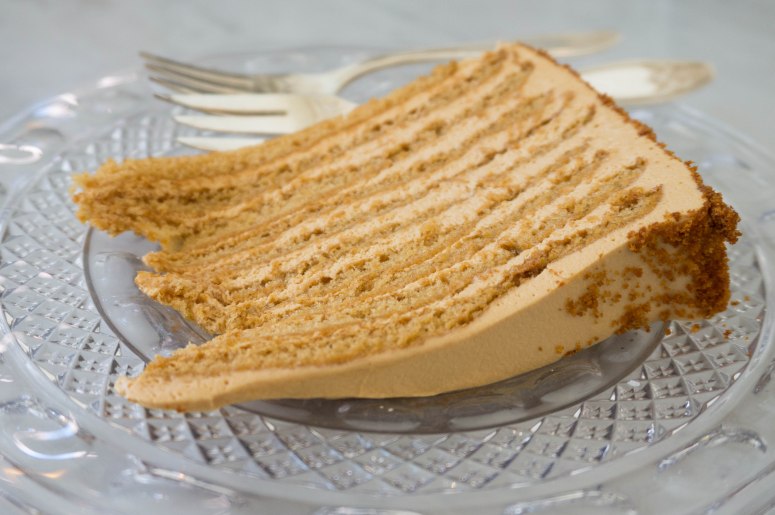 20th Century Cafe is located in Hayes Valley in SF. The aesthetic of the small storefront definitely gives off a European vibe; the somewhat kitsch-laden countertops and furnishings are a giveaway. The minimalist cleanlinss of its exposed kitchen and the employees’ 20th century garb, however, reminded me that the cafe décor was probably also influenced by the very 21st century wave of #hipster #aesthetics.

But all that being said, the cafe does offer fantastic, freshly made Hungarian food. According to Google, their menu is specifically influenced by the foods found in Prague, Vienna, and Budapest.

Full disclaimer: I’ve been to all three cities, but I don’t consider myself an expert of the foods found in that region, so while the flavors and dishes felt authentic to me, please take my words with several pinches of salt.

I ordered soft scrambled eggs with pastrami and a buttered poppyseed bagel. I was initially a little worried I wouldn’t like the pastrami, given that I prefer my meats without any fat and marinated and stewed until it’s falling apart. But the pastrami added a nice taste to the eggs — which were flavored with fresh parsley and dill, as well as pickled beets! (Or at least, what I assumed to be pickled beets.)

These garnishes added sharp hints of flavor throughout the meal. They are a bit on the strong side… The flavor they contribute is similar to that of wasabi; it hits your nose more than it does your tastebuds. But it was delicious to have this type of flavor layered on top of almost melty scrambled eggs.

As for the bagel, I’m sincerely hoping it was freshly made, because it tasted too good to have been pre-made. There were poppyseeds all over the top of my bagel. It wasn’t just a measly smattering of poppyseeds. It was a dense covering of poppyseeds. And though butter and I generally are not great friends, this bagel came thoroughly buttered from edge to edge — and I loved it.

Candle Boy ordered boar sausage and roasted potatoes served with sauerkraut and grain mustard. Yes, the dish tasted as strong as the name sounded. But from the two bites I had, I can tell you that it was a very satisfying sort of strong, not overwhelming.

And my highlight of the day: the Russian honey cake.

Russian honey cake is a hugely popular dessert in Russia. The cake consists of many layers of thin honey biscuits and light caramel frosting made from condensed milk. The top of the cake is often topped with chopped walnuts and sugar. Traditionally, the frosting and layers between the biscuits are just whipped crème fraische.

I love this cake for its flavor. Each bite of Medovik is incredibly unique and light, but it’s also unmistakably honey. While most other cakes taste sweet from sugar, you can tell that this cake was made with honey. The “sugar” taste is far less prominent, even with all the layers of frosting in between.

I’m not a huge fan of rich, decadent cakes, so finding a dessert that offers me the fluffy, moist texture of cake (and frosting) without overwhelming me with its sweetness was a dream come true.

I’ve been told by a number of people that I have a “happy dessert eating face.” I think Candle Boy gave me 2/3 of this cake slice (rather than the usual 3/5) just so he could see that face a little longer.